(This article was written in the week following the election)


Early in the U.S. Presidential campaign, Donald Trump was a source of bemusement. The hair. The fake tan that proved incapable of traversing his under-eye bags. Fuelled by the polls, Trump quickly adopted other equally entertaining mannerisms. His mindless clapping, like a trained chimp, when he took the stage. His thumb to forefinger emphasis–two hands for added effect when he tried to spin vitriol into policy points.
On 8 November the joke was no longer funny.
In the lead-up to the election, I bemoaned the state of humanity, as I do from time to time, predicting a Trump victory. Others laughed, unable to string together the terms ‘Trump’ and ‘President’, as though no degree of neuroplasticity could forge the connection without causing an embolism. And that’s precisely what happened. A national embolism. Not a terminal condition, but one with an unknown prognosis and a long recovery period.
Why was I so sure that Trump would win? Because the Americans most motivated to head to the polls generally vote faith, not reason. Whipped into frenzy by doomsday scenarios–the electoral equivalent of a disgruntled traveller wreaking havoc on TripAdvisor–they look to a saviour for answers. Being apostles, they don’t ask too many questions. They believe in miracles. And they want them–pronto. Naturally, they vote for the candidate who promises to deliver them.
Like moths to the flame, the believers are drawn to the light of nostalgia and patriotism. Harkening the good ol’ days, they vote for the America of their dreams: jobs, economic growth, affordable health care, a decisive and effective response to terrorism, security in their persons, their homes, and the nation. Laudable ends shared by both Trump and Hillary Clinton; it’s the means where they differ.
Hillary is no angel. I cried when she didn’t get the nomination in 2008–and that’s saying a lot, given those tears were matched only by the second stage of labour, when the midwife told me it was too late for the epidural I’d blithely dismissed hours earlier. A lot has happened in eight years. Clinton’s email shenanigans, coupled with the dubious workings of the Clinton Foundation, were ill conceived. Dumb. Unethical. But was the email debacle the result of a well-executed strategy that she masterminded to derive personal or professional gain? Nah. Did it make her unfit for office? Double nah.
I’m a realist at heart. I work on the assumption that all politicians operate on a shady moral spectrum, whether relatively minor transgressions (creative accounting with travel expenses) to mid-range infringements (making campaign promises they have no intention to keep) to more extreme offences (embezzlement). Virtue is optional in politics, or so it seems. Clinton tried in vain to make the election about policies. Trump manoeuvred the debate to issues of character, painting Clinton as corrupt. Americans were left with a choice: elect an asshole or a liar.
After being defibrillated on election night with a smooth Malbec Tempranillo blend (Noble grapes yielding complex secondary and tertiary aromas, claimed the snooty wine notes), I made a commitment to myself: Don’t panic! And I haven’t–yet. Here’s why:
1. Trump’s amped up rhetoric–the hateful bile he spewed throughout the campaign–was fiction, not fact. A pitch.
Since being elected, he has already reneged on many campaign promises. Not surprising for a master
salesman…of the snake oil variety. Interestingly, my 18-year old son, Aidan, picked this up when he spotted
an uncanny resemblance between Trump and Randall Boggs of Monsters Inc fame. 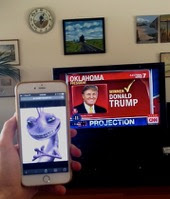 If the physical resemblance isn’t enough, note the similar tone:


Look at everyone’s favourite scarer now,
you stupid, pathetic waste! You’ve
been number one for two long, Sullivan!
Now your time is up!
(Randall, explaining his plan to Mike)


Look at that face!

Would anyone vote for that?
Can you imagine that,
the face of our next president?’
(Donald Trump, commenting on his Republican
candidate opponent, Carly Fiorina)


If I were running ‘The View’,
I’d fire Rosie.
I mean, I’d look her right in that fat,
ugly face of hers, I’d say,
‘Rosie, you’re fired.’
(Donald Trump sharing his views on
television personality, Rosie O’Donnell)

2. If it walks like a Republican and talks like a Republication, it’s a…Democrat. Trump’s true sensibility–assuming he
is evolved enough to have one–is more to the left than he wants to let on. Especially on social issues.
He was smart enough to know that wouldn’t play well to the heartland.


3. Many of Trump’s extreme notions (build a wall, deport illegal aliens, register Muslims) lack not only humanity but
also feasibility, and are logically impossible. People are rightly disturbed by his words, but I take heart
in the notion that they are empty claims devoid of common sense, meaning and purpose. I think Trump thinks
so, too. If you concentrate really hard, you can hear the sound of him back-peddling.


So, what do we do when well-intentioned democracy delivers theatre of the absurd? Boycott the production? Change the script? Sack the director? No, we accept that the human condition is sometimes inexplicable; that issues and events will always challenge us; that we need to volley and keep the ball in the air, not destroy our racquets (and integrity). We don’t take to the street and loot, or to the stage and lecture. We rise above despair to find, and nurture, the ounce of humanity that binds us together. We roll up our sleeves and have conversations–with our friends and families, with people on the streets. We agree to disagree, and remain thankful that we have the opportunity to do so. And we pray, or not, to whomever or whatever we please, for a better day.
Trump’s campaign antics shouldn’t have come as a surprise. He summed up well his modus operandi in his 1987 book, The Art of the Deal: ‘You tell people a lie three times, they will believe anything. You tell people what they want to hear, play to their fantasies, and then you close the deal.’
On 8 November, Donald Trump closed the deal. But now, he needs to follow his eighth rule of business and ‘Deliver the Goods’:
You can’t con people, at least not for long. You can create excitement, you can do
wonderful promotion and get all kinds of press, and you can throw in a little hyperbole.
But if you don’t deliver the goods, people will eventually catch on.
(The Art of the Deal)
The silver lining: If Trump falls short, his Celebrity Appresidency will come to an end in 2020 when America points its collective finger and tells him: You’re fired.
by Maura Pierlot
Email ThisBlogThis!Share to TwitterShare to FacebookShare to Pinterest
Newer Post Older Post Home